If this comic is too mean for you then I apologize in advance; yes, I have the means to do that.

This comic is from SystemComic.com

Math When It Really Matters

I smile when someone complains that math is pointless after high school/college and that it is never used in the real world.  But then again, maybe if I wasn’t so good at math I wouldn’t be as fat.

Comic was created for the Drabble Comic Strip by Kevin Fagan. 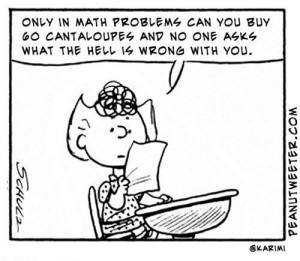 Did You Say Pi?

Who else is hungry?

Striking fear into the hearts of evil math teachers everywhere!  Is someone going to check his work?

Love Batman?  Check out some of our Batman merchandise available on eBay:

Don’t want to shop on eBay?  We’re on Amazon.com too.

Another math comic from the Abstruse Goose

If At First You Don’t Succeed, Find Another One!

I’m totally game for this idea.  But will it break our hearts if 10 years after we name the planet, “Pluto,” our technology advances by leaps and bounds and we find out that this “super-earth-sized planet” is actually a lot smaller than we thought and has been downgraded to a dwarf-exoplanet.  I’m not sure I could handle losing Pluto for a second time.

This comic is from XKCD, probably the biggest nerd comic on the net.  Back in 2013, the International Astronomical Union decided to start naming exoplanets.  An exoplanet is a planet outside of our solar system (there have been 1935 discovered so far).  In addition to the decision to start naming exoplanets, they thought it might be a good idea to take suggestions from the public.  The names that have been chosen are somewhat amusing and somewhat terrible.